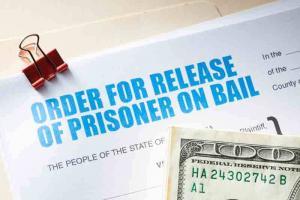 Being arrested and booked into jail can be a scary and stressful process, especially for someone who has never been through it before.
Luckily, in most cases, a person does not have to remain in jail throughout the trial process, since most people who are arrested have the option to post bail and be released. Bail is a very commonly used term, but it is often confused. Continue reading to learn more about how bail works.

In some circumstances, a person may be able to post bail immediately, according to a bail schedule. A bail schedule lists the bail amounts for certain crimes, and the jail personnel is not allowed to deviate from the set amounts.
When immediate bail is not an option, a person will have a bail hearing before a judge while still in custody. In most cases, a person who is in jail will have a bail hearing within 48 hours. During a bail hearing, the judge will consult the bail schedule as a starting point for the set bail amount, but he or she will also consider the circumstances of the case before making a final decision.
Some of the things a judge will consider before setting bail include:

Since a judge must consider many factors before setting bond, it is possible for two people who are charged with the same offense to have different bail amounts set.

After the bail amount is set by the judge, a person can be released from jail after the bond amount is paid. There are a couple of options for paying a bond. The defendant can pay the entire bail amount in full to the court or give the court security interest in real property that has a value at least as much as the bail amount.
Paying the bail amount in full to the court may be an option when the offense a person is charged with is not serious and the bond amount is not high. But many people do not have the financial means to pay bail in full when the amount is tens or hundreds of thousands of dollars.
In those circumstances, using a bail agent is the best option if a person does not want to remain in jail for the duration of their court proceedings. A bail agent often referred to as a bondsman, will pay the bail on behalf of the defendant.

Bail agents are typically private companies that specialize in posting bail. While a person can contact a bail agent themselves to make arrangements to have bail posted, family members or friends often contact a bail agent to assist the defendant. A bail agent will pay the entire bail amount, but most bail agents charge a non-refundable fee, typically around 10%, of the total bail amount.
When a friend or family member signs a contract with a bail agent, they become the bond indemnitor, meaning that he or she takes full responsibility for the defendant appearing in court. If the defendant does not show up in court and the bail is forfeited, the bond indemnitor will be held legally responsible for the total bail amount that was paid by the bail agent.
In addition to signing a contract, some bail agents may also require collateral, especially for very large bail amounts.
If you need to bail someone out of jail, contact AA Best Bail Bonds today!